S Is for Sundays 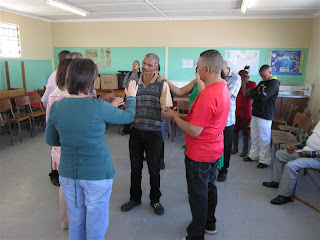 When I first became a Christian many moons ago I loved church. The church I was involved with was a new plant so things were exciting and we were on the cutting edge of things.

Since then my love of church has waned to the absolute low of 2010.

Between 2004 and 2010 I used to joke that we lived in the most beautiful place on earth and had the worst church life possible. I guess it's true, for every action there's an equal and opposite re-action.


My love of church picked up again when we were going through to Mitchell's Plain on Sundays in 2011 and my love of church has been fully rekindled with the planting of Tree of Life!

Yesterday was a classic example of why I love church so much. We've been talking about blessings lately and we've heard some amazing testimonies of God's awesome blessings but that hasn't changed the fact that some folk are still facing incredibly tough situations. As a church we could ignore this and focus on the blessings but rather we chose to spend our time praying for folk, waiting on the Holy spirit and prophesying over them. It was an amazing morning!

Labels: a to z challenge, church, tree of life