Are You Good Enough For Christmas? 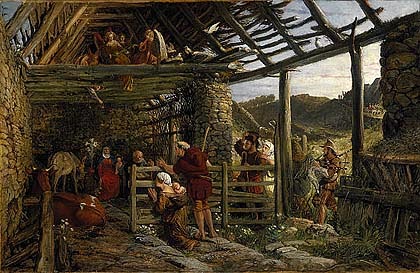 I could just follow the crowd and wish you a Happy Christmas, but I don't want to do that.

Rather, I want to take a moment to think about what the Christmas story really is.

We all know that it's about God coming down and living amongst us, experiencing our pain, grief and joy, but there's so much more going on in the story.


Firstly, God allowed himself to be born into the weakest and most vulnerable form we know; a baby.  Also, God allowed himself to be born into poverty in a crappy stable. No-one was expecting him so no-one had thought to clean the stable.  As Proverbs 14:4 tells us: "Where there are no oxen, the manger is clean, but abundant crops come by the strength of the ox.". In other words, where there are oxen there's also crap to be dealt with. Let's not forget, the straw on the floor isn't there to make things cosy, it serves a real purpose!

Secondly, just after the visit of the Magi, Joseph was warned about Herod's plot and he fled with his family to Egypt. God became a homeless immigrant in a foreign land. I wonder how the British media might have reported on this?

Jeremiah 22:3 tells us that there are three groups of people we shouldn't mess with:  "the resident alien [immigrant] the fatherless, and the widow,".

Herein lies the real Christmas story; God came down to live amongst us, to live as the lowest of the low, to serve and ultimately to die a brutal death so that we might be reunited with our awesome creator.

No matter how bad we feel we may be, or how unacceptable others may think we are, Jesus still died on the cross for us. We are all worthy, we just have to respond by confessing with our mouth that Jesus is Lord and believe in our hearts that God raised him from the dead, and we will be saved.


For "everyone who calls on the name of the Lord will be saved."Romans 10:13.