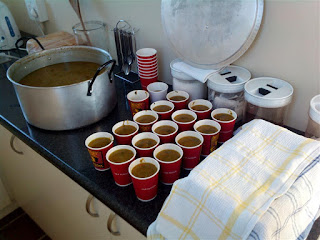 Recently we were at a Hillsong leaders lunch and were enjoying listening to a guy called Perry Noble (we had no clue as to who he was but he was very good. Read more about him here). He posed the question: "If your church closed its doors tomorrow would it be missed by the community?".  This got me to wondering whether or not The Gathering would be missed after just about a year in Firgrove.

Hand on heart I believe that we would be missed. We'd be missed for a few reasons but one of the main reasons is our weekly soup kitchen.

Friends on Facebook are probably sick of me posting about this but I love serving the community through the soup kitchen and it has become my happy place as I spend quite a bit of the day preparing for it. 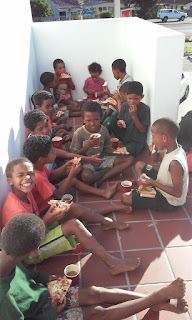 Most local soup kitchens close down over the summer months. I'm not sure why they do so, it's not as if those in need have suddenly discovered a magic porridge pot or suddenly come into money. In my experience poverty is a year round thing not just seasonal.  So we've carried on through the summer, having taken a short break over Christmas, and the feedback from those who come is that they are very grateful that we've continued.

We tend to serve three groups of people: local kids, a few commuter stragglers off the train and local poor guys. This latter group are some of the politest, most respectful people I've ever met and they in particular are very grateful for our soup kitchen. Firstly, they're grateful that in winter they no longer need to trek into Somerset West for soup, and they're also grateful that we've not stopped the kitchen over summer.

So in answer to Perry's question, yes The Gathering would be missed, and even if we were missed just because of the soup kitchen that would be fine. However, I know that the community value The Gathering and like how we've reached out to some of the most vulnerable and the hurting and for that I'm very grateful that we're having a positive impact on the community. 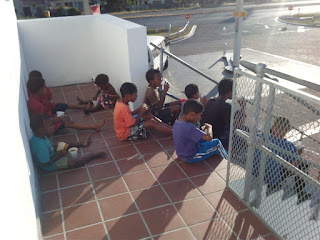 The soup is ready to be served 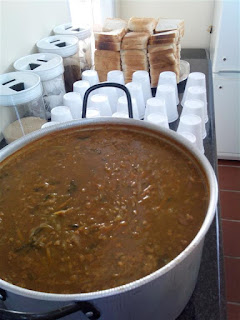 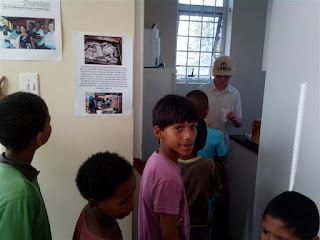