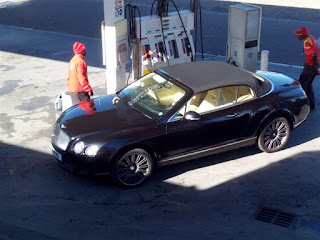 I was stood outside The Gathering's premises recently when this rather nice Bentley pulled in to the service station for fuel. Like everyone else, I stood and admired such a beautiful car but then I stood back and watched the bigger picture unfold.

But first, a bit of context...in South Africa it is against the law to serve yourself at a fuel station, you must be served by one of the attendants. It's a nice touch and the attendants normally go beyond their basic duty and clean your windows and offer to check your oil and water, invariably this leads to a nice tip for the attendants.

So, as I was watching the attendants fawning over the Bentley and its driver I saw an old Tazz pull up at the next pump. It was driven by an older man who was unexceptional in his appearance. He managed to get the attention of an attendant who then filled his car and made quite a poor job of cleaning his windows whilst unable to take his eyes off the Bentley.

As both drivers finished, something happened which really struck me and summed up much of what is wrong with contemporary values in society. The attendants had quite a bit of time for the Bentley driver and went the extra mile in servicing his car, but he drove off without leaving a tip. Meanwhile, the man driving the Tazz had to endure second class service but was still generous with his tip.

The kingdom of God works on a level that is completely counter to the culture we live in. Jesus told us in Matthew 19:30 & 20:16 that "the last will be first, and the first will be last".In the kingdom of God wealth and social status count for absolutely nothing! Zip, nada, nowt, hapana.

I know that from a theological perspective that this isn't entirely what these scriptures are about, but they do convey the basic Kingdom principles in this context of the world being messed up and valuing the opposite of what God does. The world is all to quick to worship the created whilst ignoring the Creator Romans 1:25.