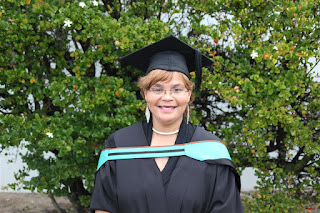 I last blogged in this series about five years ago, but just had to revisit it in the light of yesterday's fantastic celebration of Linda's graduation.

Each of my previous posts were anonymised, but today I'm naming, proclaiming and celebrating Linda for her faith, her perseverance and her never giving up, even when it would have been easier and more comfortable to do so.

Studying part time for seven years is never going to be an easy undertaking, but add in to that the loss of one's own business, one son being hit with a degenerative illness which remains undiagnosed, three family members mistakenly murdered in a gangland shooting and two abusive family members who just want your money and whatever else they can take from you, and the recipe for failure looks to be well set.


Well set that is, apart from God.

Yesterday Linda graduated with a Bachelor of Education degree (BEd) from UNISA.

Linda's faith throughout all of those years has been truly humbling and at times has made Paula and I seriously rethink how we approach our own faith and our often poor attitudes to the rubbish things that often happen in life.

Yesterday, Paula wrote the following on Facebook, and as ever she says it better than I could...
"7 years ago my dear, courageous, beautiful friend Linda was woken by God in the middle of the night. He told her clearly to follow her heart and to train as a teacher so that she could make a real difference in the lives of disadvantaged learners, particularly those who struggle to learn, as her own youngest son had been battling for years. Many people thought her insane, many tried to dissuade her, particularly as over the years she had to give up her hair salon business in order to gain valuable unpaid work experience in school; her eldest son became seriously ill with a progressive wasting disease that doctors cannot understand; 3 of her family were senselessly murdered and her life at home with her mother and step father is extremely challenging. As friends and her pastors Dean and I have always encouraged her to keep the vision that God has given her and to run with it, in spite of all her obstacles. She has often gone without; she has often not had UNISA fees until the very last hour; she has often had to study by candlelight in the cold in the early hours; she has often had to go to the doctor with stress related illnesses and yet she is one of our biggest encouragers in the church, always quick to testify and to spur others along. Linda never stops giving or growing. Today we are so proud of her as she receives her Bachelor of Education Degree, which took 7 long years to complete. We cannot wait to see you fly into the future and continue this journey with God. Most of all, the children of Macassar Primary are SO blessed to have you teacher Linda!"