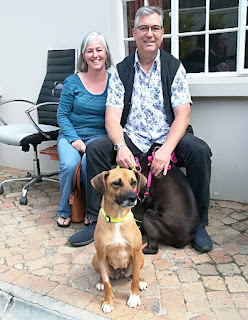 I'm not quite sure how this happened, but recently Paula was seduced by the idea of getting a second dog. Having been resistant to the idea for so long, I was amazed because this is something I've been trying to do for ages and have previously attempted to sneak a puppy into the garden. Sadly I was busted and the puppy was banished, albeit to a very good home.

Anyway, just before we left for holiday Paula showed us all a picture of Daisy and it snowballed from there. So having been approved by Animal Welfare and having passed their home inspection, they neutered her over the weekend and said we could collect her this morning. So we did.

Now Rosie and Daisy are spending some uninterrupted time getting to know each other and sorting out their stuff as dogs do. Having introduced Rosie & Daisy off the lead in a neutral environment they now seem to be getting on OK, though I'm sure there will be some issues along the way, but for now it's all quiet on the western front.

Getting Daisy's kennel home was an interesting experience! 😂 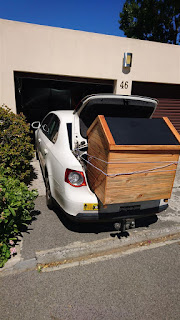