Another Reason Why We Love Africa!

Our washing machine broke recently, the door latch snapped, but given that the machine is 10 years old one can't really complain too much. In the UK this would have meant buying a new machine for sure, but Africa is the continent of the 'Fundi'. Dean popped out to a local appliance shop and bought a replacement door latch for the princely sum of R20 (less than £2), and fitted it to the old machine in under 5 minutes & Bob's your uncle, the machine is fixed!.

We first experienced this 'Fundi' (Swahili for expert or repairer) mentality in Tanzania, which is where the word comes from, in Tz we had to have shoes repaired a number of times and each time the repair by a fundi on the side of the road was better than the original workmanship (which was probably Chinese and done in a sweat shop). This mentality was also found in abundance in Zimbabwe and we had thought that with SA being far more developed and 'Western' in it's approach that this would be a dying art, but no! The 'Fundi' mentality is alive and well! Brilliant!

On Sunday we joined John (see "A Good Laugh") and Sophie for John's Birthday picnic in the Nature Reserve. We all had a thoroughly enjoyable afternoon and Joel really enjoyed the extra attention from so many other adults. 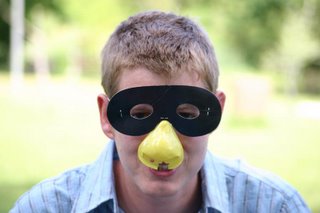 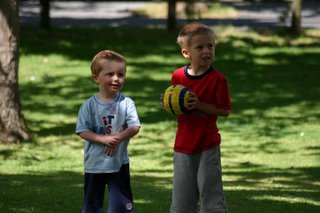