I rode the Tru Cape 40km mountain bike race this morning and whilst I enjoyed it I'm now very tired and just a little bit sore, more about that in a minute! I rode with my friend Paul and a friend of his, Paul & I ride early on Wed mornings. This was my first MTB race and like an idiot had to choose what is arguably the toughest on on the calendar. The race venue was the Grabouw Country Club and the surrounding mountains. We climed a total of 1100 metres and unfortunately only managed an average speed of 12.9kph, finishing the race in 3hours which would have placed us around 140ish out of 300+. However, there is good reason for this poor showing as I wiped out big time on 18km's, I probably should have bailed out at that point but carried on and after 30kms I was exhausted so had to stop for several minutes. This was gutting as I was probably on course for a good sub 3 hour time. Oh well, I'll have to do better in the next race which will be around the 20th in Montagu, we're going to make a weekend of it with a group of friends which should be fun.

Ouch, that's going to hurt in the morning! 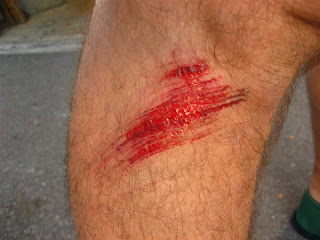 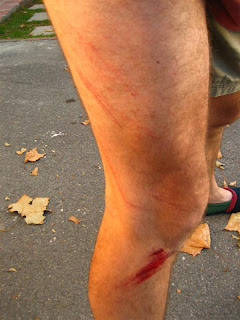