This morning a few of the guys I ride with went to the Stellenbosch Wes MTB race to ride the 55k race starting from the Oude Libertas theatre.

This was a tough race as the mud was far worse than at the last Stellenbosch race. Despite the race being 5km's shorter and with only 1200M of climbing as opposed to 1400M in the previous race this one felt tougher, probably because of the mud. Also, my maximum heart rate was 1bpm less on this race and my average heart rate was 2bpm less. I also burnt 4435Kcal on this ride! Think I've earnt a beer or two tonight.

My computer recorded a time of 3:52 but the official time will be nearer 4:15, but I'll post official results when they're available.

One of the more enjoyable aspects of this race was climbing the hills in bigger gears (it's more efficient). Previously I would have spent most of my time on the hills in 'granny' gear, small at the front and big at the rear. However in all my recent rides I've been climbing in the middle ring at the front and 3rd or 4th at the back, mainly in preparation for the Karoo to Coast on Sept 23rd. So today was my first chance to put this technique to serious use and it worked brilliantly. I was not passed on any hill at any time, but dropped plenty of guys myself. The best bit was in the last 10ks flying up the hills past the riders in the shorter races, it certainly helped me to raise my game for the last few kilometres.

My bike after the race 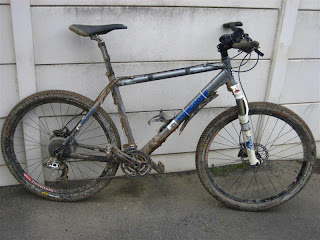 The rear derailleur was caked in mud.. 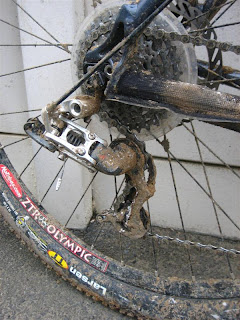 ..as was the chainset and front derailleur. 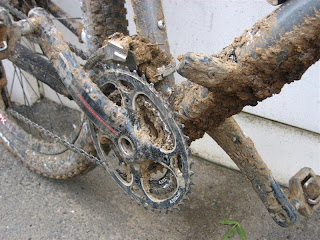