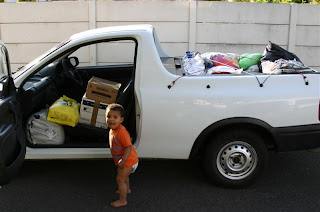 After church on Sunday morning we received news that there had been a big fire in Nomzamo which had swept through the informal settlement part of the community destroying almost 600 shacks leaving upto 3000 people homeless. We immediately spoke to our church leaders and the cell group leaders with a view to obtaining as many donations as possible of blankets, clothing food and money. In the short term these things will really help. In the long term we're also looking for furniture etc to help people rebuild their lives. Our church responded brilliantly and so far we've taken two bakkie loads of donations into the community. We'll probably have a few more loads later in the week which is great. The response is also amazing given that many folk won't be returning from their holidays until today. We're also hoping to post a few photos of the devastation and the donations later in the week.