The fire started at around 4 a.m. and was difficult to control due to the strong winds. Firemen from Strand worked for many hours to dampen down the smoke and flames.

The shacks were packed tightly together causing the fire to spread rapidly. Many homes use parrafin stoves which added fuel to the fire.

The area has long been of concern as the homes were situated beneath power lines, several of which were damaged during the blaze.

The lack of available land for communities forced people to live in this dangerous location.

People worked for hours trying to salvage what little they could.

The church responded in an amazing way, working together to serve all those affected by the disaster. By lunchtime many churches had responded in a coordinated way delivering food, clothing, physical and financial assistance.

Nomzamo Community Hall was used as a temporary location from which many hundreds were fed over the following few hours. Later that evening food and blankets arrived from the government for distribution.

Local ladies from the community worked with other volunteers to sort through thehundreds of items of clothing donated by churches in The Helderberg area.

Despite the many challenges, it was an amazing time to see people working together and serving one another. The great sense of humour kept everyone positive during this difficult time.

The main needs now are for donations of furniture, especially beds and bedding as most of these items were completely lost during the fire.

An area of land is now being prepared for new shacks.It will take about 12 days to prepare the new area. Once the site is ready, the residents will be given building materials.
Report written by Andy Hawkins.

The scene of devastation 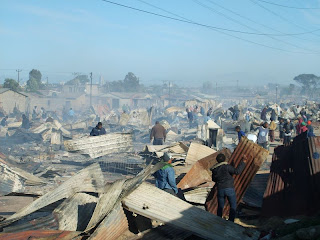 The only thing left unburnt was the zinc roofing sheets 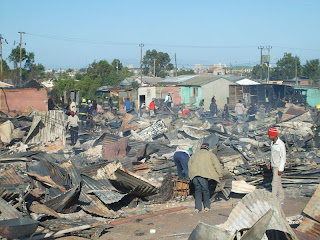 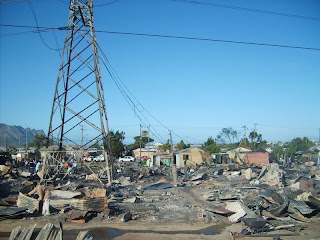 Firemen worked for several hours to control the blaze 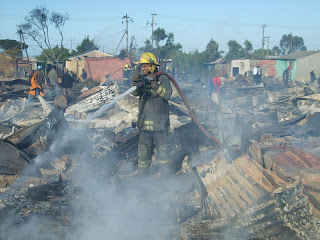 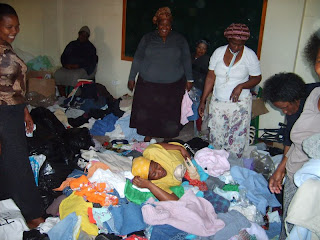 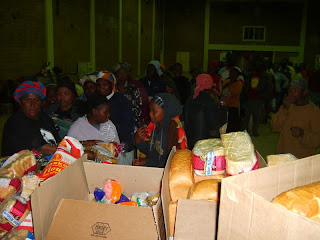