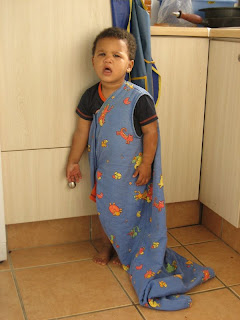 Oh dear, someone didn't wake up too well and got himself into a bit of a pickle with his sleeping bag. Actually, Eli never wakes up very well as he'd rather be left to sleep, which is why the bunk beds were a bit of a disaster. Joel is the total opposite and always wakes quite early. We're not sure where he got that gene from!

Please pray for healing for Eli, he's got a terrible ear infection, the ear is oozing blood and gunk and he won't let anyone near it. Paula took him to the GP who prescribed anti-biotics so hopefully he'll be fine again soon.

This morning in church we had some baptisms, but this time things were a little bit different as thirteen children (yes 13) were baptised. The testimony each of them gave as to why they wanted to be baptised were amazing and put many adults testimonies to shame. Not one of the youngsters gave a woolly answer, rather they were all very clear about following Jesus Christ and living for him. Awesome!!

This afternoon I sloped off to Delheim for their annual mountain bike open day organised by Dirtopia. I rode there last year and had a lot of fun so was keen to go again this year. The estate is only open for riding once a year which is a real shame as the trail is brilliant and they've put a lot of time and effort into the single track. Last year I was riding quite sporadically and nearly burst a lung on one really big hill. This year I rode the whole thing easily in the middle ring at the front and went around twice. This year really was double the fun of last year.