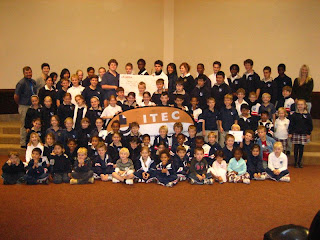 This morning I had the privilege of attending the special Miles For Smiles assembly at Joel & Eli's school.

The total raised this year was R40,375 (£3100)which is an amazing amount of money for such a small school. Last year as a school we raised enough to pay for four cleft palate operations so this year we should be able to pay for seven and a bit which is fantastic!

It was quite a moving assembly as the children who had raised over R1000 each were awarded with special certificates. Then the final cheque was presented to Operation Smile who oversee the cleft palate operations.