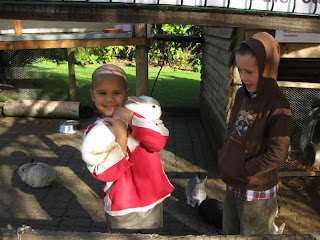 We're enjoying one of South Africa's many public holidays. Today is Youth Day which is a really important date in SA's history. We first became aware of this holiday whilst in Tanzania where today is celebrated as the International Day of the African Child. The date was deliberately chosen to coincide with the massacre of children during the Soweto Uprising in 1976 when on June 16th about ten thousand school children marched in a column more than half a mile long, protesting about the poor quality of their education and demanding to be taught in their own language. Hundreds of young students were shot. More than a hundred people were killed in the protests of the following two weeks, and more than a thousand were injured. Hence the importance of Youth Day in South Africa.

As a family it's really good to have some peace and quiet in the midst of much activity and recent chaos and to spend a bit of time regrouping. 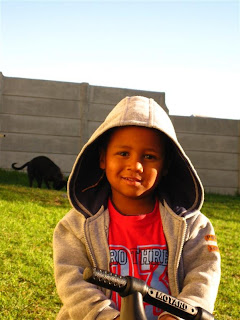 Let's start with the chaos bit.. Hayden left our family on Friday last week and it was with very mixed emotions that we all said goodbye to him. We really enjoyed having him to stay but as a family we paid quite a high price for it. The boys in particular did really well given that they had no warning that Daddy was going to come home one afternoon with a 3 year old in tow. They adapted well and were very kind to him but Joel struggled more than the rest of us as he loves his family life and its routines.

Hayden had been due to stay with us a bit longer but after a meeting with the social worker on the 18th May it was decided by her that there was no way Hayden would return to Michael and Joyce's care. To cut a long story short, Hayden has been tragically let down by the very adults in his life that should have been ensuring his long term needs were being catered for. Sadly, whilst Michael and Joyce were a part of that they were willing to try to work through the concerns of the social worker, but in the seven weeks Hayden was with us nothing was done. The action plan put forward by Dean was never put in writing. The involved parties never signed up to it and at no point in the 'process' were Michael and Joyce communicated with by the social worker. It's all a bit tragic really but we just hope and pray that an adoptive placement is quickly found for him where he can flourish. Hayden is a sweet little boy and after his awful start in life deserves something good.

We're heavily involved in the process of finishing our work in Chris Nissen in terms of Irish Aid and we're now involved with an external evaluator who is interviewing us and the many good folk of CNP whom we have worked with over the last few years. This is not to say we're pulling out of Chris Nissen, but we are reducing our time involved with the community as we spend increasing amounts of time in Macassar and Firgrove with Grace. We're in the process of setting up Grace Cares as part of Grace Community Church which will be our umbrella for the church's social action projects and we're looking to get the HOPE team covered by Grace Cares. More on that in the future. The evaluation needs to be completed as our funding from the Irish Govt has come to an end and they want to be sure that we spent it well and not bought a yacht or a Ferrari with the cash so we'll be parking it well out of sight.

Joel and Eli wanted to go to Helderberg Farm this morning to see the animals and we were having a great time right up until the point when Mummy told Eli to stay away from the pond. Being the explorer that he is he decided that the film of bright green algae on the pond was a solid surface and began walking on it. The rest as one might say "is history". Joel cracked up and disgustedly announced that Eli was covered in "toad slobber" which makes for a pleasant picture. Eli was initially quite distressed but once he'd calmed down he was also disgusted by the stench and the algae clinging to him whilst Daddy was cracking up laughing much to the disgust of the other parents in the vicinity. We left shortly after.

Oh well, tomorrow it's back to work and a life free from toad slobber.

Eli after his unexpected trip into the pond 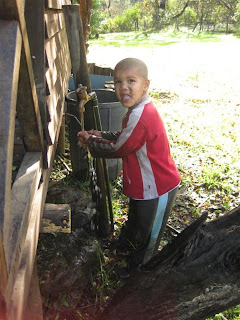 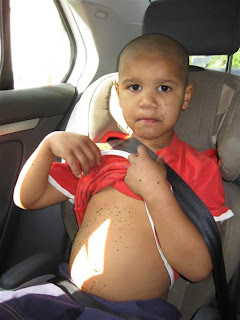