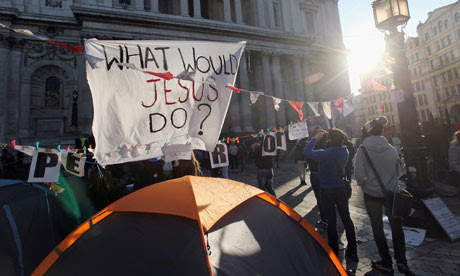 I've been watching with interest over the last week or so the debacle surrounding St. Paul's and the ridiculous way in which things are being managed.

I feel I should make some things clear at the outset. Firstly, I support the Occupy London protest and think it has a very simple and valid message that the City and govt need to listen to. Secondly, St Paul's is not a 'house of God' or a 'house of prayer'! Many may well disagree with this but as far as I am concerned it stopped being either of these things the day it introduced an admission charge. Today if you want to enter St Paul's it will cost you £14.50. I've never paid to enter a house of prayer and don't ever plan on doing so! Put quite simply, St Paul's is a museum, nothing more.


The administrators at St Paul's have clearly made some poor decisions in their management of the museum during the protests. The most obvious one being to close the museum under the pretext of 'health and safety'. So much of what is good in life is destroyed under this pretext. The media then had a field day over the wedding last weekend which was disrupted as the bride and party had to use a different entrance. In fact despite the more negative approach by the right wing media the disruption was minimal with protestors having given assurances they wouldn't hamper the proceedings. Read more here. Unfortunately, the negative spin won out, as usual.

I feel saddened that in the midst of a totally bona fide protest the protesters and St Paul's have become the baddies in the eyes of the media and therefore the public. This is particularly sad because the villain of the piece is the City and in particular the bankers who brought financial meltdown on us and yet because of the way things have been managed they've got away with being the focus of the protest.

To add insult to injury, the govt (who are also co-villains in this) refused the protestors permission to protest in Paternoster Square by the Stock Exchange because it's private property. So it's fine for the City and bankers to disrupt business but not OK for anyone to upset their business. Hmmm, something not quite right there!

I like this response to the debacle: Occupy London could be protected by Christian ring of prayer. It does beg the question what would Jesus' response be to this? Personally I think he would chase the 'money changers' out of St Paul's so it could once again become a house of prayer. Interested to know what you think?