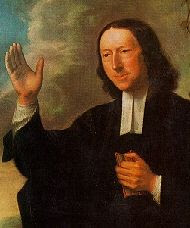 I've been really encouraged of late by John Wesley and more particularly by an excerpt from his diary. John Wesley (with his brother Charles) is one of the biggest names in 18th century British history, though his impact goes way beyond Britain's borders.

So here's the excerpt from his diary:

Over a period of five short weeks Wesley was handed a seemingly never ending stream of discouragement and an endless array of obstacles being put in his way to prevent him from continuing in his ministry.

I wonder how many of those closest to him suggested that maybe he wasn't in the right job or perhaps suggested he hadn't heard from God as clearly as he thought he had? I'm sure from my own experience of fellow believers that some of his biggest discouragements came from them.

Thankfully however, Wesley persisted and his diary entry for the afternoon of the 2nd of June reads as follows:


Sunday, P.M., June 2 Afternoon, preached in a pasture. Ten thousand people came out to hear me.
WOW! What an amazing encouragement! Wesley persevered and God honoured his faithfulness.

I like this definition of persevere: to persist in anything undertaken; maintain a purpose in spite of difficulty, obstacles, or discouragement; continue steadfastly. - This is exactly what Wesley did despite weeks of discouragement. For most of us, and certainly for my part if I had been told on May 5 "Not to come back anymore" I probably wouldn't have gone back and would probably have given the evening service at St. John's a miss too. Wesley however preached seven times in five weeks, each time being left in no uncertain terms as to what was thought of him. Certainly that's enough discouragement to chase away the most persistent of people. Thankfully it wasn't enough for Wesley, he persevered, he fixed his eyes on the things of God and chased after them.