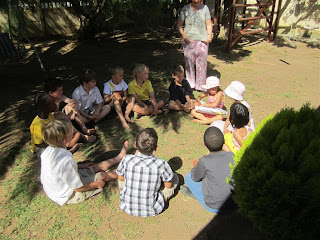 Once again we celebrated Eli's birthday just before the end of the school year so that as many of his friends were able to come as possible.

Much fun was had as 13 of his friends ran riot around the garden, climbing on the tree house, playing on the jungle gym, bouncing on the trampoline and getting dirty in the sand pit.

In fact so much fun was had we only had time for one organised game. Pass the Parcel went down a storm as ever and we even got away without having the inevitably distraught kid that can't accept they didn't win. Phew! 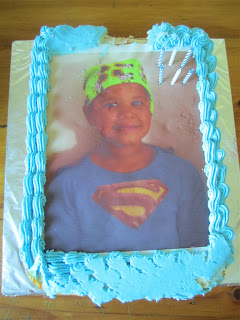 Eli wanted a picture of himself on his cake (and why not?) but sadly the icing was ruined when the cake slipped off the car seat.

So Eli's birthday month is well under way and he's really looking forward to sharing his birthday on the 21st with his middle cousin, Bethy who's joining us for Christmas.