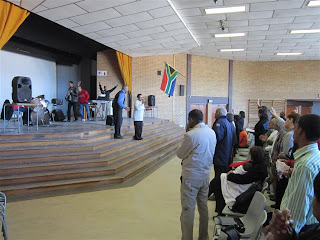 We had such an amazing time at our celebration meeting two weeks ago!

It was a real family time as Tree Of Life were joined by Love & Grace from Mitchell's Plain and Simon's Bay Christian Church from Simon's Town.

Graham's team from Mitchell's Plain lead the worship, Shaddie brought a great word and Tree Of Life organised the celebration and lead it. It's such a blessing to be involved in churches working together for the extension of the Kingdom!

Time seemed to slip by, in fact it was three hours but hardly seemed like 3 minutes. Towards the end many folk were prayed for for healing, one was saved and others were deeply impacted by God's love.


One couple came, have now joined Tree Of Life and are now wanting to get married. Fantastic!

Just prior to the meeting, Shaddie was out by the school gate greeting folk and prayed for a lady who's legs were in a bad way. We heard on the following Wednesday that she had been healed. God is awesome!

Shaddie also had a word about someone who was struggling with rent, believing that God was saying he would sort it out. I knew from Saturday that Francisca's laundry business was in a mess as someone had taken her washing machines and locked the building so she couldn't get in. Amazingly, she shared on Wednesday that her rent had been paid for the next month and her machines had all been returned. Praise God! 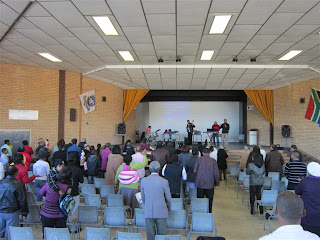 Shaddie brought a great word leading to salvations and healings. Here he got a guy up to help him. This man had only been released from prison a week earlier and believed God had led him to us. Hallelujah! 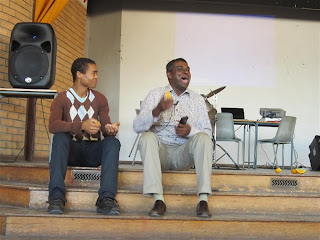