Growth Of A Soup Kitchen 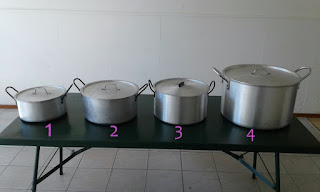 It’s Thursday so in social media terms that means I must be about to post my obligatory weekly pic on Instagram, which then automatically re-posts said picture on Facebook and Twitter. However, this week I’m posting the inevitable photo right here on our oft neglected blog.

This is a pic of the five (yes five!) pans The Gathering owns. Currently we’re just using the big one on the right, it’s quite large and holds 50 litres which means we can serve 200 cups of soup.


So the little one on the right is what it all started with over two years ago when we served the grand total of thirteen people in our first Soup Kitchen. That was followed by at least one week in which no one came for soup, but we pressed on and contrary to all the discouraging and unhelpful *advice* we received from a few folk, we purchased pot number two, a slightly larger pot so we could make and serve more soup. This step of faith was blessed and people started coming regularly and The Gathering’s Soup Kitchen took off.

Next, we began making two pots a week, using the first two pots and our Soup Kitchen continued to grow. After quite a while we were blessed with pot number 3 which was just a bit bigger than pot 2, and so we started cooking two big pans each week. Then we got another pan the same size as pot 3 and that made measuring the ingredients out between two pots a whole lot easier! It's always the little things that please the most.

Recently however we were blessed with pot 4 which as I said holds 50 litres and is almost three times the size of pot 3.

Hopefully as The Gathering’s Soup Kitchen grows we will be able to get another 50 litre pot and serve even more soup.