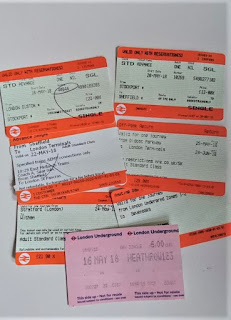 My last post was about coming to Blighty and the sense of expectation that is attached to a Roadshow tour around England. Apart from one last engagement this Sunday in Oxshott (which I'm really looking forward to) my trip is all but over and my thoughts have naturally turned towards home and seeing my peeps again.

It has been a great time, but it has been quite tiring, and the first two weeks were a bit of a whirlwind as I caught a train from London to Stockport, spent a few days there then got a train to Sheffield where I spent a couple of days before getting a train to London where I spent a few days in Wimbledon -which included a train ride out to Witham in Essex- before getting a train to Abingdon, and then finally a train to Weald to spend the last week or so with Paula's family. I have to say, it's nice to be able to hang a few shirts up rather than grabbing bits out of the suitcase!

The Roadshows have been a lot of fun and it's been great to be able to share about the life of The Gathering and all that is going on there. I could happily talk for hours about things in Firgrove so it was a challenge at times to stick to the script we had prepared. It was also great to catch up with so many good friends and to have a laugh together. Revisiting some old haunts like All Hallows in Cheadle was also a pleasure. 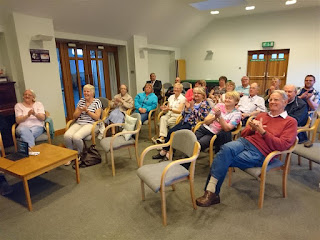 Things I've struggled with back in Blighty...
Waking up at 4am because it's so bloomin' light and the lack of fresh air flowing through British buildings. It's easy to forget just how green Blighty is but it's also easy to forget just how light it gets very early in the morning, my body clock wasn't ready for that.  Also, British houses are pretty much draught proof these days to cope with the winters, but in SA our homes are anything but draught proof because they're built for long summers, so I missed that feeling of fresh air swirling around indoors.

But now I really do want to go home.