Madness Before The Calm 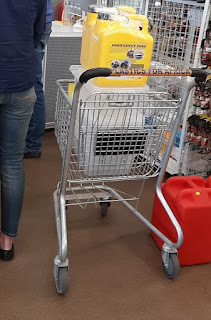 We were given four days notice of the impending lockdown and that seems to have been the cue for action for the Zombie Domesday Preppers and their attendant madness. Despite pleas not to panic buy the shelves are stripped bare with very little available in any of the food shops.

This morning Paula tried to buy stuff for our weekly Soup Kitchen and almost instantly regretted going anywhere near the shops. Thankfully we managed to scrape some bits together between us and so our last Soup Kitchen for a while will proceed. Thank you Lord!

It all leaves one feeling that April Fool's Day should be cancelled because no prank could possibly match up to the stupidity of what's going on out there right now.

Anyway, this all got me thinking about the other side of the nonsense... what about those folk that can't afford to stockpile, the folk who can't afford to stop working, but will be forced to. We know lots of these people and some have grasped the gravity of the situation, but some of the poorer more vulnerable folk we know are quite oblivious to what it may mean for them.  The truly heartbreaking part in this for them is that they will have to deal with it and get through it somehow on their own because most of their regular channels of support (churches, soup kitchens, shelters etc) are being forced to close. As I was returning from Firgrove this lunchtime I was struck by this impromptu banner some local residents had put up. Quite simply it says: "21 Days without work is a death sentence". I find it hard to argue against this and am concerned for the residents who put it up, but there's little to nothing I can do other than share their plight on social media in the hope that someone who can help might see it.

I also got chatting to some friends who started a small cafe recently and they're seriously worried because they won't qualify for the govt's bailout package here because they're not BEE (Black Economic Empowerment) compliant, they're just two white women trying to earn a living.

There are no easy 'oven ready' answers to all of this and to a certain extent there's not much more we can do than wait and see how life looks on the other side of the pandemic. It's unsatisfactory and heartbreaking but equally very necessary.