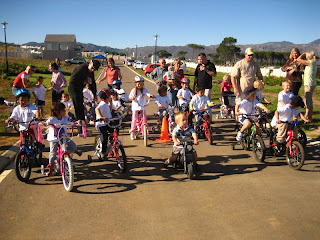 This morning was a big one for the boys as they proudly donned their Miles for Smiles T shirts and set off to complete as many laps as they could in 2 hours to raise money for operations for children with cleft palates. The event was once again organised by their school and the boys had been looking forward to it all week!

Eli got off to a flying start (literally!) and took the little ones race by storm whizzing round the coned off track. The only trouble was that he didn't know how to turn corners, so we had to do a bit of quick coaching! After half an hour all the little ones had given up, so Eli took off to join big brother Joel on the "big boys" 350m track!!! Joel got off to a valiant start, completing a lap and then having a huge rest!! After lots of encouragement, he eventually managed a stunning 29 laps (a little over 10K's or 6.3 miles in old money) and really enjoyed himself. The event was organised brilliantly, with all the kids racing on different tracks around a brand new housing estate - so far no tenants, so it was paradise for them all!

The morning was topped off when Dean entered the parents race - 3 laps of the track (as used by the upper school - and won it with style, winning the family a 2 night stay at a luxury tented camp about an hour away from Somerset West. Well done Dad!!!!! That's two years in a row he's won and is delighted that the cycling is paying off at last. 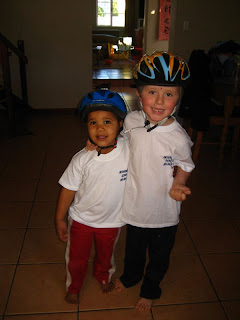