Blogging From A To Z Challenge - Y 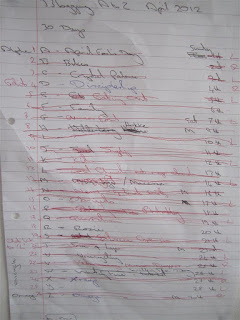 Y is for Yowza!

OK, so it's a bit tenuous but I'm still expressing my surprise at having completed the A To Z Blogging Challenge. Yes yes there's still Monday's post but that's already written and scheduled to post.

I've had a lot of fun doing it, I've met some great new cyber friends and visited some really good (and the odd strange) blogs. I'll definitely be doing it again.

One of the highlights for me has been the encouraging comments and hearing that one or two folk have been eagerly looking forward to see what the next letter would be about. I hope you've enjoyed it too.

I've also enjoyed the discipline of committing to the blog and being intentional in my approach to it. I'm not sure the 'Schedule' facility will forgive me for abusing it as much as I did but without it I would have fallen at an early hurdle. As you can see from my master list I made some changes as I was going and 'I' was definitely for Indecision! I chose not to blog about my boys for E and J as I felt it was a bit unfair on them. Other than that I just blogged about the things that are important to me. Next year I'll try to come up with a more interesting theme.

What to blog about next?

Labels: a to z challenge, blogs