Blogging From A To Z Challenge - Z 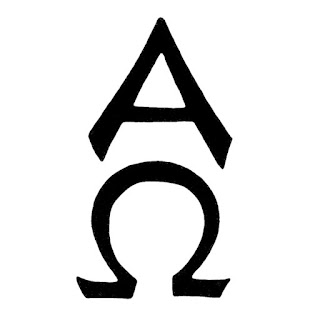 Z is for Ω

At least it is in the Greek alphabet.

I try to live my life in a manner worthy of the gospel of Christ, though I know I often fail. This may be unappealing and a bit of a turn off if you don't profess a faith but I can't help that. I hear all the arguments for and against God and increasingly hear the vocal anti-Christian lobby of Dawkins et al and find myself even more convinced of my faith.

The most preposterous claim by the likes of Dawkins is that Christians are not capable of free thought or of questioning what they are told. I would argue it's the other way around. Dawkins and his acolytes are the ones blinded by ignorant and irrational arguments. The bible is full of people questioning God and their faith and in the apostle Paul we have a fantastic role model for free thinking and questioning the status quo.

As Paul said in Romans, I am not ashamed of the gospel.. and as such I don't really care what you think of me or my faith. I'm not worried if you attack my faith or if my faith offends you, it's just that I believe in the living God and am happy to let you know this. Yes you could beat me in an argument using science and goodness knows what else but I've seen and experienced too much as a Christian to turn my back on Jesus. Also, I am deeply skeptical of the world and what it has to offer, whilst the world may deride my faith, it has little if anything of any value to offer in its place. I've seen and experienced some of what the world has to offer and it's not nice, it's not pretty and it does more harm than good. What I can tell you is that the faith journey I've been on over the last 27 years has radically transformed me from an 18 year old messed up waster and I simply have to give thanks to the living God, the Alpha and Omega.

ABCDEFGHIJKLMNOPQRSTUVWXYZ
Here endeth the series Blogging From A To Z Challenge, April 2012. Normal service will be resumed shortly.