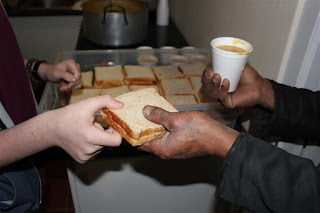 I've been wanting to take some photos of The Gathering's Soup Kitchen to show the children at Eli's school as a thank you for their hard work making sandwiches each week, and to try and challenge them as we show them that not everyone has a privileged background.

Rather than patronise folk with the usual full on photos, I wanted to capture their hands receiving soup and sandwiches and I have to say I'm very pleased with these. 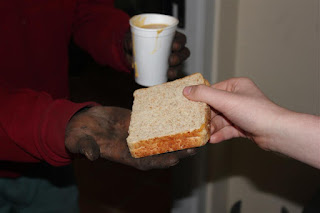 This one really captures the dirt of hard working poverty stricken hands. These are the hands of one of our long-standing regulars and the poor guy thought I was telling him to go and wash his hands, he looked really embarrassed until I managed to convince him that I wanted his hand just the way they were.

I'm really looking forward to showing these to the kids that make the sandwiches!