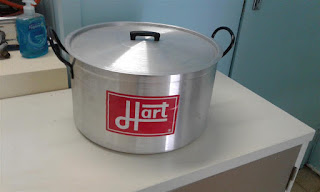 It's been a funny old week.

It has been a week of small jobs and disjointed routine, but somehow in the midst of that it has also been quite satisfying. I'll explain the disjointed bit up top...Paula is now in Spain for some valuable time with her big Sis & family, she left on Wednesday and her penance for abandoning us was 34 hours of travelling 😂. So I'm attempting to impersonate Super Dad for a couple of weeks but I'm not very good at impersonations.

Back to the small jobs... I finally sourced a new large saucepan for our Soup Kitchen, meaning we can serve more for a bit longer. It was heartbreaking turning away an elderly couple this week because we had just served our last cup as they entered. It will also mean the soup is easier to make as I'll just do a 50/50 split with the ingredients rather than faffing around with trying to measure stuff out into a large and a smaller pan.

I've replaced the locks on the front door, so now we have a thumb lock on the inside making it easier to keep our Homework Club safe. We have a new much sturdier padlock on the roller-door and I also managed to pass on the beautiful couch we were given. It was a really comfy couch and had been recently reupholstered, but it was way too big and took up too much space, so passed it on to a church family who are very happy with it. It's always good to be able to pass on blessings. 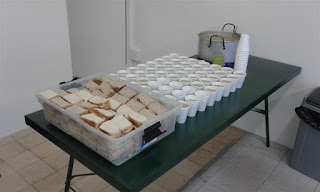 Eli's class made the sandwiches for our Soup Kitchen this week and he was very proud of the job they did, and rightly so. He was telling me how he had told his mates that they need to do it well. I'm so proud of him, he doesn't give much away so this was special, and I love knowing that he values this task. I have to say they were done and packaged very well and they went down a storm with our regulars. 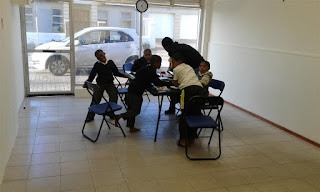 It's been great to see our Homework Club back in full swing as the new term begins. The kids were all excited to be back and we now have several new kids who are settling in. It's great to be able to say that The Gathering's Homework Club is now full with 24 kids and we have a waiting list again.  When we changed the format and doubled from 12 to 24 kids we did wonder how on earth we'd fill the spaces, looking back it's amazing how short sighted we are at times. 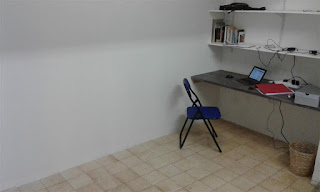 With the couch gone I've once again got a usable work space and it's been good to spend time working here. Our new plan is to get two small armchairs in with a small coffee table, that way we can have meetings, councilling sessions etc there but won't lose quite so much space.  I'm also hoping to get an office chair soon.

Hopefully too I'll be able to get the church printer working next week, it's not a cooperative machine!

Charging the tablets is a never ending small job! 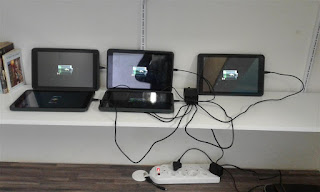