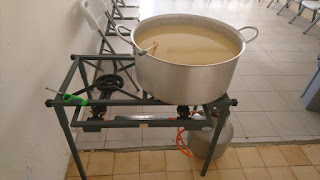 When I was in the UK earlier this year I was really excited to talk about two future plans we had for The Gathering's weekly Soup Kitchen.

The first one was our Christmas Lunch for 120 of our regulars and the second was taking our soup up from 70lts to 100lts, but we were really going to need some miraculous blessings for these to happen.

Well, just a few days from our Christmas Lunch on Sunday and the blessings poured out on the planning and preparation are immense. We are totally blown away by God's goodness! The lunch has been more than covered in terms of financial gifts and goods and the blessings are so overwhelming that the Christmas Lunch is helping to provide for the next step in taking our weekly soup up to 100lts.

Space is a premium in The Gathering's current premises and as we were planning for the cooking of the food on Saturday and Sunday, we realised that we needed an extra table on which we could place the gas stove. So rather, we decided on a gas boiling table (seen above) and within a few hours of deciding that was the way to go we received a gift which covered its purchase. Hallelujah! 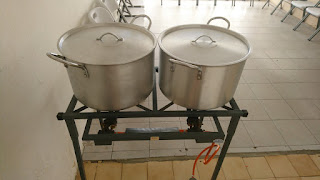 We stepped out in faith earlier in the year and bought a second 50lt pot and had our eyes on a gas boiling table as it would be the only practical way of actually cooking with both pots at once.

So not only are we really well catered for for this weekend, but the Soup Kitchen is now ready to go up to 100lts any time now.